$19.99 (Amazon)
Kenneth Sean Carson, popularly know by his nickname Ken, is a fashion doll manufactured by Mattel, Inc. He was created by Ruth Handler, and she named Ken after her son Kenneth Handler.[1]

According to Barbie Vlogger, Barbie moved to Malibu, California at age 8 where she met Ken who lived in the house in front of him. In Barbie Dreamhouse Adventures, he is shown to attend Golden Beach High in Los Angeles.[4]

Ken has had styles, careers, and friends over the years.

Ken met Barbie in 1961 on the set of their first television commercial together. The couple fell in love and started dating.[2] Barbie broke up with Ken on Valentine's Day in 2004.[5] To impress Barbie, Ken got a makeover from stylist Phillip Bloch in 2006.[6] Barbie and Ken got back together in 2011.[7]

In 2010, Ken starred in Toy Story 3. The same year he created his Facebook page and Twitter account. In September 2010, he appeared at New York City's Fashion's Night Out.[8]

In 2009, Barbie and Ken attended the New York Fashion Week to celebrate Barbie's 50th Anniversary. It was their first appearance together in years.[12]

Ken is described to be confident, intuitive, considerate, loyal, supportive, compassionate, and a dreamer.[13] 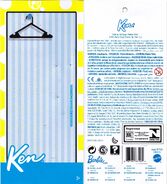