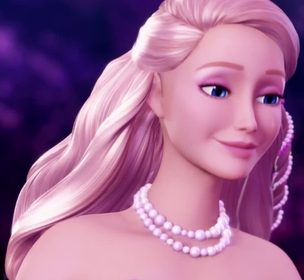 Lumina is the protagonist of Barbie the pearl princess and she is voiced by Kelly Sheridan. She is a 17-year-old mermaid and the heir to the kingdom of Seagundia. Born with the royal gift of pearl magic, Lumina is able to command pearls. After being kidnapped as a child by Scylla, Lumina grew up thinking Scylla was her aunt. She was raised outside of Seagundia and longed to travel and explore.

Lumina is a selfless and kind girl who sees the best in people. She loves to be creative and make things elaborate and extraordinary. Even though she had only had one friend, Kuda, her whole life, she was able to make friends very easily due to her personable nature. Lumina likes to help people and make them feel more confident, and she likes to see people thrive. She is very imaginative, which helps when she styles hair at Salon La Mer and plays Mermaid Princesses with Kuda.

Lumina has light skin, blue eyes and long blonde hair. She has a shiny tail, and she always wears a waist purse full of pearls. Usuaully, Lumina has a light blue and pink tail. She wears a pink and blue bandeau, and accessorises with pink and white pearls. In Salon La Mer, she temporarily had a short bob hairstyle. While shopping for attire for the ball, she tried on different outfits, but settled on a pink skirt and pearls to accessorise. When she transformed into a princess, her hair gained pink highlights and she got a tiara. Her tail became pink, orange and purple, and her skirt got longer. She was given the Pearl of the Sea, the royal medallion that has a large pearl in the middle.